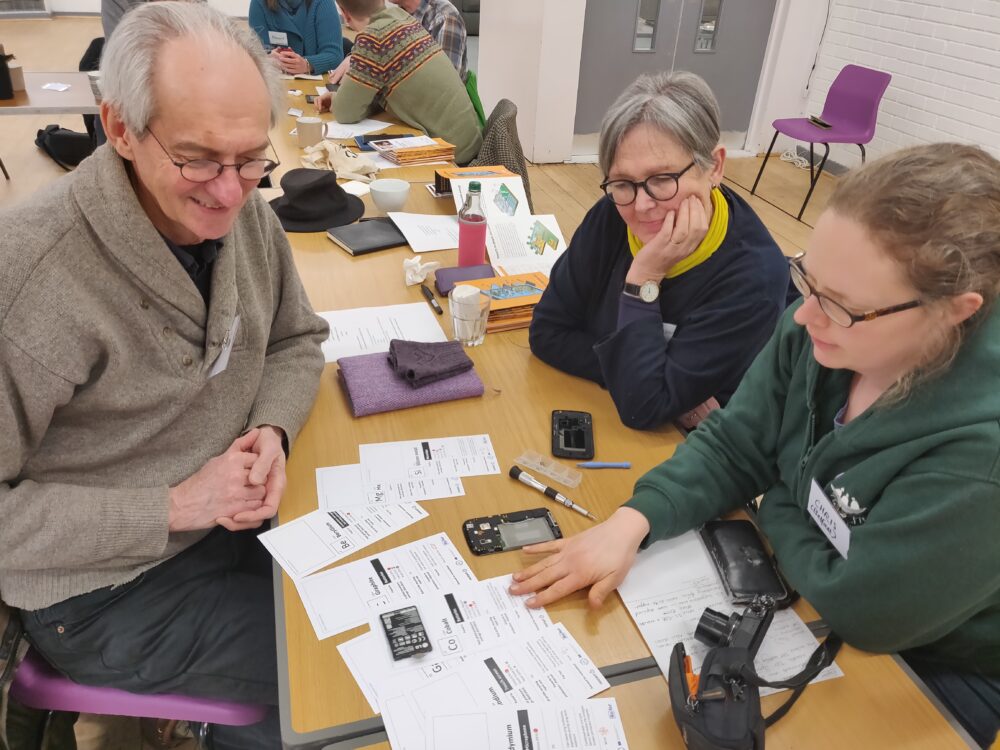 “No idea. I’m not very technical. Probably some special sciency stuff that I’d never be able to pronounce anyway!”

This imagined banter is a simple (if not silly) lead in to a deeper conversation about what’s in our devices. Educating ourselves about these materials matter helps us better understand what’s in the technology we use, encouraging us to consume less and maintain what we currently have to prolong the life of our devices, buying precious time for the recycling industry to catch up as new technologies emerge.

Repair Cafe Glasgow hosted a weekend event that included groups from across the UK including Repair Cafe Wales, The Restart Project, Repair Cafe Belfast, Remade Network and ourselves. The purpose was to share our collective knowledge with organisations interested in establishing their own community repair initiatives. We called it SYSARC: So You’re Starting A Repair Cafe.

We began the weekend with our normally scheduled monthly event at Clyde Community Hall, a local community centre. We’ve found our events are best attended on a Saturday between 12:00-3:00pm. Normally we have about 40 visitors and this week was no different! With the addition of our visitors the hall was just about packed to capacity. The energy was fantastic.

Our team of regular volunteers is around 30 strong and includes bakers, electricians, textile repairers, joiners, hosts and data collectors. After nearly two years in operation, our volunteers are well settled in and know how to make each event a success.

Would it have been cheaper for folks to just buy new gadgets, doodads, and thingamabobs?

In purely monetary terms, yes; but our goal is to spread the idea of a different economy where the life-cycles of our consumer goods are extended, where we consume less and repair more, and ultimately where the extractive economic systems in place are supplanted with a kinder, gentler system for all of us.

We’re not there yet but are working to fix the world one toaster at a time.

First up was Cerys from Repair Cafe Wales who spoke to us via video stream. She shared that the Welsh government had given the organisation a grant to establish 8 repair cafes in Wales by December 2020. As of that day, they had already established 30 and had a long waiting list of communities wanting to open repair cafes.

One unique feature of the Welsh model is that groups fall under one central organisational umbrella and therefore benefit from a reduction in insurance costs. They also have a voluntary system in place whereby groups with more financial resources support groups that are less well resourced.

Glasgow was up next. Funding was first on our list and we told our story of how the co-founders chose the repair cafe model, and how they chose to apply to a specific fund, because those were familiar to them.

We shared how we recruited our volunteers from several places: from an existing pool of volunteers at the community centre where we were based, through Volunteer Glasgow, and through word of mouth.

Lunch arrived from Soul Food Sisters, a local social enterprise, and consisted of various international delicacies from North Africa, Poland, Spain and South America. Everyone reflected on how good the food was and hopefully Soul Food Sisters will have some new customers.

Lee and Chris from Belfast then told us their story of their first event, where they thought nobody would show up and how they were so excited when the event was a success. The most memorable story was of an older gentleman who travelled across sectarian lines on the bus to attend a repair cafe on the other side of Belfast. Clearly, repair cafes are about much more than fixing our stuff; they are also about fixing ourselves and mending our broken relationships with each other and our communities.

Sophie from Remade Network spoke about creating repair social enterprises that rely on a mixture of traded versus grant income, based on the model she helped create for the Brixton and Edinburgh Remakeries. Establishing these businesses took years of coalition building between community organisations, local governments, and funding bodies, but once up and running they are much more sustainable than organisations that rely solely on grant funding.

And last but certainly not least, the Restart Project’s own James Pickstone educated us all on CRM: those bits in our phone made from irreplaceable rare minerals, often mined under slave-like conditions lacking any health and safety protections and managed by international criminal organisations.

This practical session included tearing down a late-model mobile phone to see what was inside. Some in the room had never seen the inside of one, so it was quite a learning experience for them. Others had taken apart dozens of phones, but never actually knew what made up the components til now. The resources we used that day are all available from the Restart Project on their Material Matters page of their website.

Our hope is that this event inspired the groups who were there to press on with their plans to start a community run repair initiative. The collective energy from the weekend continues to inspire us here at Repair Cafe Glasgow, and we look forward to working alongside new groups and expanding the reach of the Restart Project’s educational materials about what is in our devices and how to make them last longer.